We were headed to Marco Polo Plaza Cebu and were near the Banilad flyover on our way to the IT Park when Waze, the driving application I was running on my phone, gave the direction to turn right.

Waze had determined, by going through its database of roads in Cebu and reports of traffic conditions sent in by users, that the quickest route for us was to go to that neighborhood behind Gaisano Country Mall, pass through Camp Lapu-Lapu and a small side road and emerge on our way up to the hotel.

END_OF_DOCUMENT_TOKEN_TO_BE_REPLACED

LAST Thursday, I got the phone number of an elementary school friend I haven’t had contact with in more than a decade. After saving the contact info in the cellphone I am currently testing, a Nokia 5800, I immediately synchronized my phonebook with Zyb.

But Zyb’s core function is to make sure you have an updated (and backed up) copy of all your contact details. It is a very useful service especially when you get a new phone or use several units.

To make sure you always have the latest contact details of people, Zyb regularly reminds you to synchronize your phone book with its servers.

END_OF_DOCUMENT_TOKEN_TO_BE_REPLACED

Nokia formally launched in Cebu last week its latest model in the XpressMusic product line, the Nokia 5800. The XpressMusic line is Nokia’s answer to Sony Ericsson’s Walkman phones, devices that are designed for music playing.

The features of the Nokia 5800 are formidable—it comes with all the features you’d expect from a modern phone plus touchscreen control, built-in A-GPS, wi-fi connectivity, high resolution 3.2-inch display, and a 3.2 megapixel built-in camera with Carl Zeiss optics and dual LED flash. 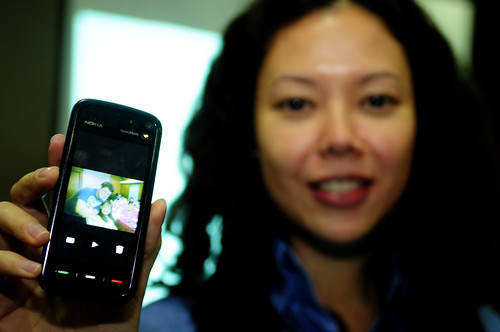 END_OF_DOCUMENT_TOKEN_TO_BE_REPLACED

Google released last week a new version of its Google Maps for Mobile application. The release, as with many of Google’s products, is designated “beta,” a label used for software that is still being actively tested and not yet released to the public.

I’ve read about mobile maps applications before, including the earlier Google versions, but I never bothered trying it out because I don’t travel much. In fact my daily travel is such a routine I can tell you what size of potholes are located in which part of the highways in Mandaue and Lapu-Lapu Cities. 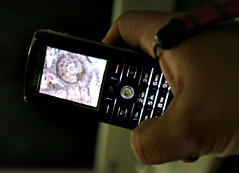 GOOGLE MAPS FOR MOBILE. A satellite photo of Fuente Osmena rotunda as seen through the Google Maps for mobile application running in my Sony Ericsson K750i. Click on photo to enlarge.

But what caught my interest in last week’s announcement is a new feature in Google Maps: it can now plot your location using the cellphone towers of your mobile network. The application then displays a blue dot showing a bigger light blue circle to display your approximate location. That feature is called My Location.

END_OF_DOCUMENT_TOKEN_TO_BE_REPLACED

It was love at first note when I heard Amy Winehouse sing. Her voice exudes raw emotion unmatched in decades.

I first played my copy of her Back to Black album in Rhythmbox in my Linux laptop, while I was struggling with getting a graphical interface to Subversion working. When I heard her sing, it was as if I mangled my system and did an svn merge that automagically produced a track from my collection of songs of Dinah Washington, Billie Holiday, Sarah Vaughan, Eartha Kitt, and Dodo Greene.

I wanted to sleep to her songs. I didn’t want, however, to leave the laptop and the modem router on. The siren’s calls were too strong, I knew I had to have her songs in my MP3 player.

Luckily, I had bookmarked VConvert.net weeks earlier, when I spotted a link to it in the popular bookmarks page of del.icio.us.

END_OF_DOCUMENT_TOKEN_TO_BE_REPLACED

For less than the monthly subscription fee of a cable TV connection, you can now watch digital TV anytime and anywhere on compatible mobile phones.

Smart Telecommunications Inc. and 360media launched on Tuesday myTV, a service that allows people to view high-quality TV broadcasts on their phones. The quality of the video is really great, it’s better than the quality of the SkyCable feed, on a bad day, to the unit next to my newsroom cubicle. 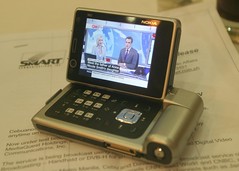 MYTV. CNN as viewed on a Nokia N92 unit during the Cebu demonstration of Smart’s mobile TV service. Click on photo to enlarge. (Photo by Sun.Star’s Ruel Rosello)

Unlike the current prevalent video streaming and downloading service, myTV does not use the cellular network to transmit the video. It is broadcast, similar to how regular TV receives images via an antennae. MyTV uses the Digital Video Broadcasting-Handheld or DVB-H platform for broadcasting.

END_OF_DOCUMENT_TOKEN_TO_BE_REPLACED

I was finally able to run an Apache, PHP, MySQL server on my Sony Ericsson K750i. I did it on my second attempt, the first was disastrous, and that’s putting it mildly, as I crashed my phone and I had to reformat its memory card, wiping out several photos I haven’t been able to save to my PC yet.

I have long wanted to set up a development web server in my K750i, which also serves as my primary USB drive.

WORDPRESS ON MY PHONE. Installing WordPress on my K750i, using Uniform Server. The phone doesn’t actually run it, its memory card is merely being used by the PC to run the server. Click on image to enlarge.

I use my shared hosting space for my WordPress-related work and experiments as well as tests on PHP/MySQL scripts that catch my interest. This setup is such a hassle. I have to FTP files to and from the server and sometimes connections can be so slow that frustration creeps in.

The files in my account have also become such a mess because I’ve tried quite a few scripts, each with its own sub-domain.

I decided I should have a “web server on a stick,” a functioning Apache, MySQL and PHP server on a thumb drive. The Sony Ericsson K750i, as with most multi-media phones, also serves as a USB mass storage drive. This makes it possible to set up an Apache server on its memory card.

END_OF_DOCUMENT_TOKEN_TO_BE_REPLACED

I finally got my Sony Ericsson K750i to work with the Gmail for mobile application released last week. The first time I tried it, I couldn’t get the inbox to load.

It was puzzling as I could access the Internet using Opera Mini. I kept changing Internet settings and I still couldn’t go past the “loading” screen for the inbox. Just as frustration was threatening to boil over, I spotted the solution.

ACCESSING GMAIL ON K750i. I finally got to connect to my Gmail account using my Sony Ericsson K750i and a Smart Buddy connection. Click on photo to enlarge.

It turns out that you have to specify the Internet settings for Java applications in the K750i. If you’re using a Sony Ericsson with a Smart account, this might do the trick for you: Go to Settings then Connectivity then Settings for Java and pick Smart Internet. That solved the issue for me and I can now use Gmail on my phone.

The application is indeed faster and better to use. I have never been able to use the K750i’s default email program to connect to my Gmail account. I remember spending days trying to make it work a few months back, to no avail.

END_OF_DOCUMENT_TOKEN_TO_BE_REPLACED

I never got to watch the BBC documentary on free and open source software that first aired in May. I missed the first few airings because these were broadcast at crunch time in the newsroom, when I’m off chasing page deadlines.

While browsing Google Videos for clips to watch in my phone during times when I’m off the PC and waiting for an appointment with nothing else to do, I found The Codebreakers clip.

I immediately downloaded a .avi version of the clip and converted the video to play in my phone using instructions I wrote about earlier. While searching for articles about the documentary, I found this page in the Asia-Pacific Development Information Programme. It turns out that the documentary is available for free download on a Creative Commons license. If you’re interested in a 3GP version of the documentary, let me know and I’ll upload the file.