Or at least I did. I jogged four rounds at the Cebu City Sports Center oval today and walked another round, with Me First and The Gimme Gimmes and Ramones threatening to bust my eardrums.

But jogging is serious business and you can’t just listen to any song while running. Bob Dylan and jogging don’t mix. Bob Dylan songs, as with Beatles songs, are songs you listen to while writing an article that should have been submitted last week. These are songs you listen to while smoking, with a glass of Tanduay on the other hand, and discussing with friends how you can change the world.

Pavarotti and Bocelli don’t cut it either. Their arias and soaring melodies leave you out of breath while listening, you’d be panting before your first lap. Bedroom Radio, on the other hand, is for another exercise and should never be used as jogging accompaniment.

For jogging, it has to be punk music.

I started with Me First and The Gimme Gimmes. Favorite Things, Phantom of the Opera Song and I Sing The Body Electric got me through the first two laps. I was that slow.

On the third lap, it was Cabaret. Now, The Gimme Gimmes’ Cabaret is a curious song to run to, the “What good is sitting alone in your room?” until the “your table is waiting” part blurs things around you and you get conscious of how rapid your panting is. But you get a burst of energy at the “no use permitting some prophet of doom” part and you’re off to yet another lap.

Cabaret’s ending, however, saps the energy out of you. It was good that the next track was “Will You Still Love Me Tomorrow” and I was off running again until “Somewhere Over The Rainbow.”

By this time, I was really out of breathe and not even Ramones’ “I Wanna Be Sedated” could “ba-ba-ba-bamp, ba-ba-ba-bamp” me on and I settled to a brisk walk for a final lap, going through “Sheena is a Punk Rocker” and ending with “Teenage Lobotomy.” 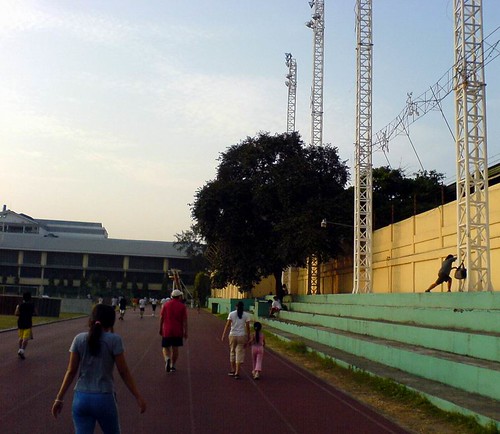