Picture yourself working on a bamboo table under the coconut trees on a beachfront in Bohol. Beside your laptop, imagine a scoop of Bohol Bee Farm avocado ice cream to refresh you as you finish a report due in three hours.

On this age of widespread mobile connectivity, this is increasingly becoming an option.

Many online freelancers, for example, make a living by working for clients from all over the world in fields ranging from design, writing, social media management and tech tasks from home or wherever they are, even on family vacations.

Offices are also starting to allow remote work, with studies showing increased productivity in such a setup.

END_OF_DOCUMENT_TOKEN_TO_BE_REPLACED

YOU know QR or quick response codes have gone mainstream when they appear in the ample bottoms of Britain’s female beach volleyball champions. The codes, when scanned with mobile phones, direct users to a betting website.

The Daily Mail reported that Zara Dampney and Shauna Mullin have been paid a “substantial” figure to have the QR codes printed on the bottom of their bikinis.

That piece of quirky news illustrates the increasing use of QR codes, which are 2D bar codes that contain data–from text to numerical strings to website addresses. It was developed by Toyota subsidiary Denso Wave in 1994 to keep track of vehicle parts.

A study by comScore said that 14 million users in the United States scanned a QR code in June. Of the number, 61 percent were male and 36 percent were in households making more than $100,000 a year.

The study also found that mobile phone users are most likely to scan the codes found in newspapers and magazines.

END_OF_DOCUMENT_TOKEN_TO_BE_REPLACED

I wrote this column in Google Docs, the Internet search giant’s free online office suite. I thumb-typed a rough outline on an Android device—a Samsung Galaxy Tab—before I finished the first draft on my favorite desktop, which runs Ubuntu Linux, and edited the final piece in my office PC, which runs Windows XP.

All the time that I worked intermittently on this article during free time from desk work, I did not know precisely the physical location of this digital file nor the number of its copies and iterations. All I knew was that it was in Google’s data centers–precisely where I do not know nor care.

Saving digital office files in the correct location is among the first things you are required to learn on the job, whatever the industry or the size of the company. In our newsroom, file location is something seared into your brain the very first day on the job. Unless you saved your article in the designated folder, editors cannot access your story in the modern-day filing tray called The Local Network. END_OF_DOCUMENT_TOKEN_TO_BE_REPLACED

DocSyncer, a service that synchronizes Microsoft Office documents in your computer with your Google Docs account, has just updated its application to allow you to choose which folders should be synchronized.

When I first tested it (read the previous post), it immediately synchronized all compatible files in the desktop and the My Documents folder. It offered no interface to designate which folders or files to synchronize with your Google Docs account. I found this lack of control unnerving.

But when I opened the DocSyncer application late yesterday afternoon, the list of folders now had an edit button. The edit interface allows you to specify which folders, in the desktop and My Documents folder, will be synchronized.

The change is a tremendous usability improvement. 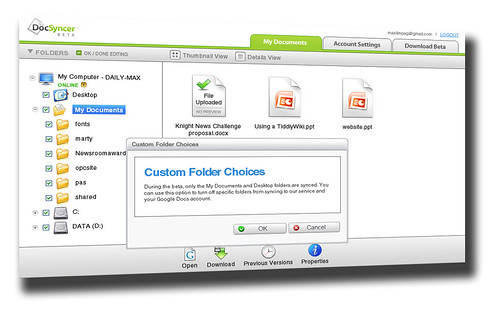 CHOOSING FOLDERS. DocSyncer now allows you to specify which folders, in the desktop and My Documents folder, should be synchronized with your Google Docs account.

I finally got an invitation to try out DocSyncer, a service that allows you to automatically synchronize Microsoft Office files in your PC—documents, presentations, and spreadsheets—with your Google Docs account. 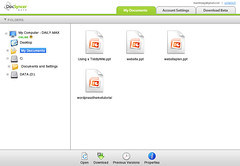 DOCSYNCER. The service synchronizes your Microsoft Office documents with your Google Docs account. It’s still being tested and far from being a dependable day-to-day application. But you should bookmark DocSyncer as it holds a lot of promise. Click on photo to view larger image.

The service is still in beta but DocSyncer holds a lot of promise. I tried it out for close to two hours last night and found that it’s not quite ready for daily use. It is, after all, still in beta or testing phase.

What’s evident when you try the service is the lack of user control over such things as designating which directories to synchronize and refreshing the list of files due for synchronization.

When I first ran the software that you download to work with the service, it immediately synchronized all Power Point files, Word documents in .doc format, and Excel files contained in My Documents folder as well as the desktop. It did not ask me to specify which folder to synchronize with my Google Docs account. (This has changed in the latest DocSyncer update)