I WAS bewitched by Elaine Page in the middle of the night in enchanting Siquijor Island.

Bothered by the grumbling of my stomach because I skipped dinner to catch up on sleep, I woke up bewildered at midnight.

It took me a minute to realize how I ended up where I was last Friday midnight—on a strange bed in an unfamiliar room at the center of Siquijor town in mystical Siquijor Island. I was invited by Smart to test the High Speed Packet Access (HSPA) network it deployed late last year in Siquijor and Dumaguete City.

There are places where it would be fun to find yourself in at midnight. Siquijor is not one of them.

After a quick bite in what I suspect was the only open store at that time in the island—a Park ‘N Go bakery—I made of to explore the town. But less than a block on, I realized no one was up. And knowing where I was, I wasn’t so sure I’d be excited to see someone up that late. 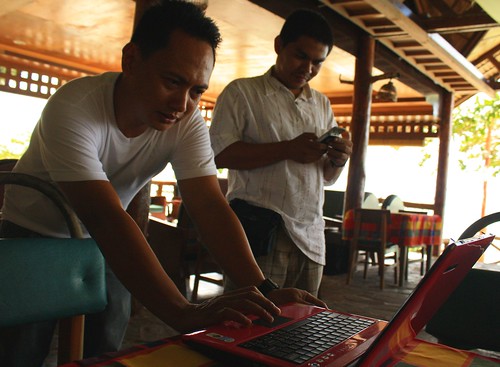 REAL MEN USE PINK LAPTOPS. Smart engineer Ronan Garcia (left) checks the Smart Bro Plugit configuration in my wife’s hot pink laptop during a demonstration of the capability of Smart’s HSPA network in Siquijor, Siquijor. Although I found forum posts on how to make the Smart Bro Plugit USB modem work in Linux, I decided to suffer the ignominy of using a Windows laptop—and a pink one at that—because I didn’t want to deal with hardware issues on the field.

So I went back to my room, turned on the laptop, plugged in the Smart Bro USB modem and continued to follow the current Internet meme du jour—Susan Boyle and her performance in Britain’s Got Talent.

I watched videos of her stories and interviews on various US TV networks in news website as well as in YouTube. It was then that I recalled my mental note to check Elaine Paige on YouTube. Boyle, when interviewed by Simon Cowell, said she dreamt of being as successful as Paige.

I watched Elaine Paige sing “Memory” and was instantly captivated. Listening to her in the dead of the night in the halcyon town of Siquijor is nothing short of haunting.

It helped that my Internet connection was fast and the videos were loading as quickly as these were playing. A quick test at Speedtest.net indicated my connection was at the .5mbps level. The connection in Siquijor, Siquijor was so fast that earlier that night, Smart engineer Ronan Garcia had the moxie to load and play two YouTube videos at a time without the browser having to pause to buffer data.

Ronan was showing off. Earlier that day, however, he was perspiring profusely when, while showing me how fast the network was, the YouTube video he loaded stalled several times to buffer data. The videos would play but you needed to pause it first to let the browser buffer data for smooth playing.

It wasn’t that slow for me although to provide context, let me state that I surfed extensively even during the time of dial-up connections. I am more patient with these things.

Later, however, connection was cut off. I was told, after Ronan talked to some colleagues the day after, that the problem involved the network outside Siquijor and that even those in Dumaguete City encountered disruptions.

When this was fixed, however, I was surfing at high speeds. The HSPA signal covers a large part of the town, including several beach resorts a few kilometers from the town center. I told Ronan that if you make a living blogging or running websites, you could just relocate to Siquijor with the high-speed HSPA Internet access and a local Western Union branch to claim your Google AdSense earnings.

But apart from accessing the HSPA network in Siquijor through a laptop, I was also making use of the mobile broadband connection through a Nokia N96 unit. I continually browsed the mobile Web, checked my e-mail, posted tweets and even photos through TwitPic.

In Dumaguete City, I continued surfing at high-speed through the Smart HSPA network in the city. The signal covers the downtown area and the airport and its surroundings.

And while waiting for my order at the iconic Sans Rival Cakes and Pastries in The Boulevard in Dumaguete City, one mental image kept flashing in my head as if seared into my consciousness. In that picture, I was on a lounging chair, running my network of sites from the shores of one of Siquijor’s immaculate beaches.