Now, what do I do? That was the first thought that formed in my mind when I first opened Gimp about 5 or 6 six years ago in an Internet cafe on F. Ramos St. in Cebu City. 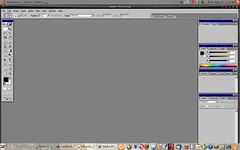 Having been reared on image editing with Photoshop, I couldn’t find my way in Gimp. I’m not really a graphics person but I use Photoshop often for editing photos, editing images of screen activity for tutorials, and creating blog and website headers.

I tried various open source software after Mike’s introduction and even stuck with using many of them. But not Gimp. I once tried Gimpshop, a modification of the program to replicate the look and feel of Adobe Photoshop but then I found myself using Photoshop after a few days of playing with it.

More than a month after I switched to Ubuntu Linux in my laptop, I found that I missed having Photoshop in it for certain tasks. I did manage to create a blog header using Gimp but it took me at least ten times longer than it would have taken me in Photoshop. I had a hard time even resizing images in layers or removing backgrounds of photos.

While I’ve decided to actually learn to use Gimp or Gimpshop (I just found out it has a .deb file I can use for installation in Ubuntu) in the coming weeks or even Inkscape, I need to do some image editing now and these tasks couldn’t wait while I try to find my way in Gimp. 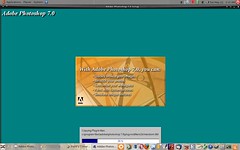 I copied the Photoshop 7 installer from my backup hardrive to my USB stick and used it for the installation. The installation was pretty straightforward as I had added Wine earlier (version 0.9.33) using the Add Remove applications tool in Ubuntu.

I just attached the USB stick containing the installation folder, right-clicked on setup.exe then chose open with other application and typed wine in the custom command. After that, the familiar Adobe Photoshop installer took over.

I finished the installation and created an application launcher in my bottom panel. But before I added the launcher, I first searched around for a .png icon to be used with the Photoshop launcher. I then saved the icon, using Gnome commander running as root, to /usr/share/pixmaps/.

To add the Photoshop launcher: 1. I right-clicked on the bottom panel, 2. chose custom application launcher, 3. added wine "c:\Program Files\Adobe\Photoshop 7.0\Photoshop.exe" as command, 4. chose the Photoshop icon. According to this site Save for web will not work if you use forward slashes to point to the Photoshop.exe file.

Days after I installed Photoshop in my Linux laptop, I’ve had no major problems using it. I’ve been able to edit images just as I used to when I was still using Windows XP.

There is a minor irritant, though, of the application being open in several instances of your virtual desktops. It’s particularly irritating for me since I segregate my tasks on specific desktops. What I do with Photoshop is open it and finish the image editing task (no more Web surfing breaks while editing images) so that I can close the application and proceed to my other tasks.