The project management application I use extensively for some of my tasks has turned its back on the open source beginnings that attracted me and, I’m sure, many others to it during its initial versions.

ActiveCollab is a clone of the popular Basecamp project management application. The main difference is that while Basecamp is a hosted service with various account levels, activeCollab is something you install in your own server and on which you have full control. 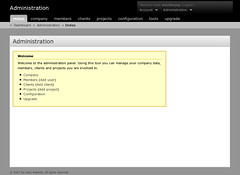 PROJECTPIER. The ProjectPier installation that replaced activeCollab in my webserver. I’m using the goCollab monochrome theme that came it.

The project management application appealed to do-it-yourself type geeks who wanted to host the data on their own and deal with less restrictions on accounts. Plus, it was free.

When it was first released, activeCollab came with an open source license and that was what attracted me to the project. I thought it held promise of being a very powerful and useful project management application if developed by an active community of users.

But the developer has decided to stop open source development on the project. Development will now be closed source, at least on the core features. The next release, version 1.0 due out next week, will also not have a free version. Your only options for activeCollab 1.0 are SmallBiz ($199) and Corporate ($399).

I do not begrudge the developer of his choice in taking the closed source path and releasing the product on a commercial license. It is within his rights and I hope he makes a lot of money out of it.

But for those who can’t or don’t want to pay for the new activeCollab version, a new group has forked the project’s last open source release, version 0.7.1. The group, ProjectPier, already has a release and development, based on activities in its site, seems to be already starting.

I’ve long been waiting for an activeCollab fork ever since the announcement on the change of license. When I spotted the link to ProjectPier, I immediately downloaded its release and installed it in my server—replacing the activeCollab 0.7.1 running in it.

Since ProjectPier is still basically a rebranded activeCollab, the installation is just the same. After you upload the files, an online installer will guide you into setting up your account. What’s good about ProjectPier is that it comes with several themes that you can use to customize your site’s design.

ProjectPier offers you a way to upgrade from activeCollab to its first release but I chose to start fresh, copying the remaining pending tasks in the system and then deleting my old installation.

I have high hopes for ProjectPier. I hope more people will start using it and getting involved in the development process. I also hope that web hosting companies like Dreamhost will replace their one-click activeCollab installs with that of ProjectPier.