Microsoft Philippines launched this morning in Cebu the Windows Server 2008 Foundation, its server solution for small and medium businesses.

Windows Server 2008 Foundation is a server solution that allows a company with less than 15 computer users to set up a network with file and print sharing, remote access, security and other general server capabilities. It comes bundled with server hardware that can cost as low as P57,000. Bawal said this is the first time that a server software is offered at this price point.

For the first time, Bawal said companies no longer have to pay client access license for each user of the system. 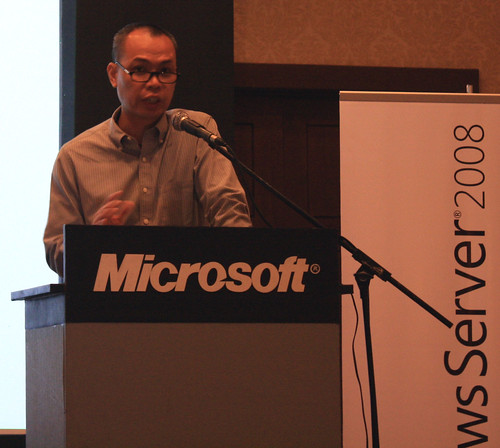 SERVER FOR SMALL COMPANIES. Boy Bawal of Microsoft Philippines says that Windows Server 2008 Foundation is the first time that a server software is offered as a hardware bundle for as low as P57,000. He said the product will help small companies grow their businesses and boost their competitiveness.